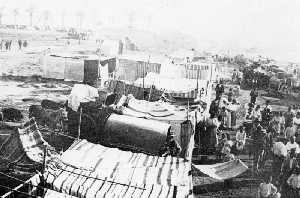 Towards century XIX, Los Alcázares reaches the condition of nobiliary residence during the summer period. At the same time, there is an exodus of population from the country side of Murcia, whose object is to practice the 'novena' (nine baths at least), in the form of sea ablutions, following an ancestral custom. With the passing of the century, the confluence of both flows of visitors caused conflicts, especially among the resident families, who see their plots and private plots invaded by the huts of the farms.

One of these families were the Fontes, as the central nucleus of Los Alcázares, at the time was on the land that was the property 'La Cerca', owned by the Marquis of Ordoño, José María Fontes Alemán. This great lover of the Mar Menor built a market, urbanized plots and, between the late XIX and early XX centuries, offered many plots to working people, by the system of emphyteutic census, which involved the annual and long-term payment, so that the Farmers and fishermen in the region could acquire property, where their families had settled for generations.

In 1898 the Hermitage of the Assumption was built, then parish. The XX century comes to an end in Los Alcázares, linked to the conflict arising from the jurisdictional dependence with the deputations of San Javier and Torre Pacheco; and the mining fever, which breaks into the exploitations of the Sierra de Cartagena-La Union, at the end of the previous century.

Between 1901 and 1902, Alfonso Carrión Belmonte built the Balneario de la Encarnación in Los Alcázares, a magnificent masonry work on the beachfront, which would be the starting point of a tourism process, the development of which has been growing to this day. In 1904 a propaganda leaflet of this spa was published, constituting a landmark of tourist promotion at the time. The tourist activity was boosted to the point that the number of visitors in summer came to surpass the residents, which were reduced to some sixty neighbours during the rest of the year.

The demographic and economic development of Los Alcázares in the first half of the 20th century was determined by this tourist development, but also by the establishment in 1915 of the Air Military Base, since it became the destination of numerous military, as well as constituting the first maritime aerodrome in Spain and fourth in the Spanish Military Aeronautics (after those of Cuatro Vientos, Alcalá de Henares and Guadalajara). The construction of the aerodrome was fundamental for the economic and social development of the town. In the decade of the 20s, the Air Base lives its epoch of greater splendour, with the visits of illustrious personages like Alfonso XIII, the infant of Orleans and Ramon Franco.

The notorious demographic increase caused by the installation of the Air Base was further increased in 1936, when the military insurrection triggered the transfer of personnel and equipment from the extinguished Cuatro Vientos Base to the base of Los Alcázares. This arrival of population contingents to the military enclave made it necessary to provide new accommodation and social services to meet the demands of the new residents. With this motive a City council is constituted under the auspices of the aerial military command, that the commander of the base, Ortiz showed. The mayor of this first municipal experience was Don Antonio Menarguez Costa. This City Council would be functioning until the end of the Civil War.

The road to the establishment of Los Alcázares as a municipality

In the decade of the 1940s, Los Alcázares achieved the status of Minor Local Entity, as well as the constitution of the first Neighbourhood Council. However, it continues to long for its independence from the City Councils of San Javier and Torre Pacheco. In the decade of the fifties an alternative way to this situation is produced: the creation of an independent municipality. However, it will not be until 1972, when the creation of the Association Heads of Family of Los Alcázares boost the coveted independence, initiating in 1977 steps before the governmental authority.

In August of 1977 a popular movement arises, shielded under the initials G.I.A. (Alcazareño Independentist Group), and in 1978 the Pro-Ayuntamiento City Council of Los Alcázares was created, for which President Manuel Menarguez Albaladejo, son of the first mayor in 1936, was elected president. After going a long way, the Council of State, by resolution dated July 14, 1983, favourably informs the segregation file, creating the City Council of Los Alcázares on October 13 of that year, by Decree 77/1983, which creates the Municipality, through the segregation of part of the terms of the municipalities of San Javier and Torre Pacheco.